If you arrive at the top of the village, you take the forest path that leads to the junction of the Casa di Monte-Macchia Antonini. After a few meters on the right, an iron gate opens onto the Parco della Rimembranza. 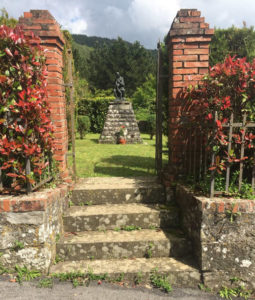 The description of the park is taken from the newspaper calamecchino Alcide Biagi which, in the twenties of the twentieth century, devoted itself with passion and tenacity to the fundraising and the creation of the park: “… November 2, they have organized a public quest in the chestnut which brought them £ 146.85 and the next 6 a dance party which, with the sale of paper flags, brought in £ 87.35 … The park we built and which we can admire is located at the upper end of the village, on the road to Casella, in the area of an old cemetery. It is an almost regular square of about fifteen meters on each side. Its walls, almost completely rebuilt, were glued to the concrete with the brick cimasa laid with a knife. From inside the park, the wall is about fifty centimeters off the ground. Upstream, another wall was built for the buttress, and the space between one wall and the other, filled with earth, it will have to be used to plant and grow a small hedge of greenery. On the side of the road where the entrance is located, a wall was also built parallel to that of the park, which forms a rectangle and therefore has two rectangular flower beds of about eighty centimeters long each of five meters wide, filled with earth on the sides of the entrance. and here too ornamental plants or a hedge of greenery must be planted. The outer wall is equipped with a railing, it is a beautiful perspective on the park and is both protection … Calamecca July 28, 1928 Biagi Alcide “. When it was inaugurated in 1928, the Parco della Rimembranza was dedicated to the memory of the victims of the First World War. Today, it commemorates the victims of the two world wars: in 1967, the sculpture representing a mother with a child was added to the center of the park in memory of the civilians who died from 1940 to 1945.