In the sixteenth century, the story of Calamecca is enriched in connection with the acts of the Florentine hero Francesco Ferrucci, who became a symbol of the Republic of Florence and who is also quoted in the Inno di Mameli, the Italian national anthem. On August 1, 1530, Ferrucci, who was in Pisa, called for the rescue of Florence, which had been besieged by the imperial and pontifical army. 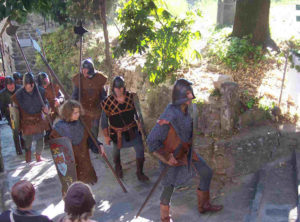 Pressed by the papal troops led by Fabrizio Maramaldo, Ferrucci climbed the valley of Pescia until he reached Calamecca, where he spent the night of August 2 to 3. He felt safe because Calamecca was a stronghold of the Cancellieri, who were opponents of the Panciatichi allies of the Medici, and so were friends of the Florentine Republic and adversaries of the Pope. That night, Ferrucci wrote his last letter, known as the letter to Dieci di Balia. On the morning of August 3, the Republican army reached Gavinana, where they found the enemy. Ferrucci, wounded, was captured and brought before Captain Maramaldo, who stabbed him; but before he died, the story 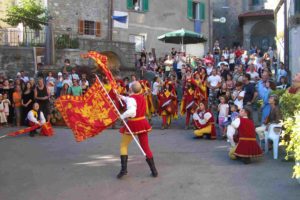 goes that he found the strength to say the famous phrase, “Coward, you strike a dead man.”
In the square of Calamecca lies a plaque on the right wall of the castle door commemorating the passage of Ferrucci. The inscription by prof. Ciro Goiorani, poet and patriot of the Risorgimento, compares Ferrucci to the king of Sparta Leonida who, with a handful of men, sacrificed himself for the Greek people during the epic battle of Thermopylae: 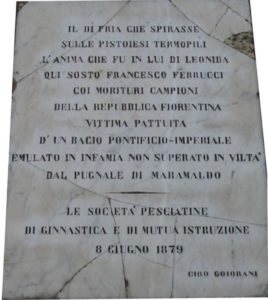